Ben Ruttenburg and his partner Samantha Francis, the musicians behind the acoustic duo the Bidwells, played their last show at the Diamond Steakhouse in Chico on Wednesday, March 11.

Up to that point, Ruttenberg had kept track of their concert dates on a wall calendar, marking each day with an X as it passed. On the calendar were notes about the Bidwells’ planned shows for the rest of the year, upcoming collaborations with other musicians and a June vacation to Italy.

The swiftness and severity of the spread of COVID-19 forced Butte County and the rest of California into mandatory quarantine by March 20. Still, Ruttenburg thought that lockdown would end by the summer. The Bidwells didn’t have the largest following, but they figured they’d be able to return to their successful music business by then.

Instead, their weekly Wednesday-night gig at the steakhouse would be the last booking they would have for the next eight months. The musicians started losing their sense of time.

“And I realized around March, April and May that I’ve forgotten to start to, like, cross out days,” said Ruttenburg. “Like, weeks would go by where I just hadn’t even looked at my calendar at all because everything was canceled.”

Along with filing for unemployment insurance, Ruttenburg and Francis had to adapt if they wanted to continue making music and making a living. At first they tried streaming their performances on Facebook Live for a few hours at a time, interacting with people in the comments section. It was a way to provide themselves and their audience a nice but small sense of connection.

Yet the Bidwells wouldn’t return to the spotlight until they received a call from a fan of theirs sometime after quarantine began.

The fan was worried she wouldn’t be able to visit her mother because of COVID-19. Mother’s Day was coming around, so she decided to send the Bidwells to serenade her mom at home.

Ruttenburg and Francis walked up to the mother’s house and knocked on her door. To her surprise the duo played some songs on her front lawn. She loved it.

“It really fed our souls,” said Ruttenburg. “The Facebook Live thing was great for what it was, but it wasn’t like playing for human beings right in front of you, just experiencing that [emotion] in the moment.”

The Bidwells had struck a chord in people’s hearts. They shifted their attention to launching a singing-telegram service, which has helped them successfully adapt to their new financial and creative reality —they’ve delivered more than 60 telegrams since Mother’s Day.

A global pandemic isn’t the first time Ruttenburg and Francis have had to pivot. Before they formed the Bidwells, the couple had been playing in Chico-area cover bands. Two or three years ago, Francis began having problems with her hearing, which made it difficult to keep performing amplified, percussion-heavy music. So they switched to a more acoustic-focused sound.

“We came to sort of realize that, hey, you know, with this acoustic thing, we can build a dynamic around this issue to where, you know, your voice still sounds as beautiful as it ever sounded,” Ruttenburg said.

In pre-pandemic times, the Bidwells recorded and released an album, “Anywhere You Take Me.” The record features a song that Ruttenberg wrote back in 2012, called “The Mess.” In times of upheaval and great change, he says he thinks about the song often.

“It’s a song I wrote to myself to remind myself [of] times of transition, when we’re moving from one part of our life, one chapter,” said Ruttenburg. 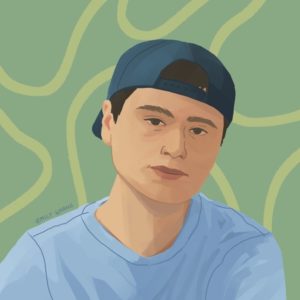 Julian Mendoza is a student at California State University, Chico, majoring in journalism and minoring in criminal justice. His goal is to break investigative stories that showcase issues in marginalized communities. He’s a fellow at CalMatters and multimedia editor for the Orion, Chico State’s independent student newspaper, where he works on visuals and the weekly news podcast. Julian is from the Bay Area and loves a good run.