Wall-filling murals with flamboyant, colorful letters that spell out words like “unity,” “love” and “grow” are sprinkled across the city of Chico.

Muralist and graphic designer Jedrek Speer, also known by his moniker Seizer One, has created these works of art and witnessed firsthand the community’s increased interest for murals amidst the ongoing global pandemic.

“I was actually surprised at how many people approached me during the literally full-blown pandemic,” said Speer. “Like everyone’s at home, everything’s shut down and people are like, ‘yeah, we want to paint this mural.’ And I was like, weird.”

For example, Speer painted a mural for the Boys and Girls Club organization in Paradise, a neighboring town to Chico, where Speer spent the majority of his adolescence.

The mural, depicting a forest and an outstretched arm covered with the words, “Here we grow!” was a project that had personal resonance for Speer.

“It was an interesting reflection because it wasn’t the best time in my life growing up there,” said Speer, now 43. “I was often on my own quite a bit, which gave me a lot of freedom and it gave me independence as a person and I think it made me who I am.”

Speer was also approached to create a mural outside of Catalyst Domestic Violence Services during the pandemic.

“It’s four large words: love, safety, support and respect. Two of those words, ironically, are part of … a long time vision of mine to paint a series of words in Chico: peace, love, unity and respect that comes from rave culture back in the ‘90s,” said Speer.

In Chico, the response to Speer’s murals has been mostly positive.

“I just can’t believe how many people are super stoked to see any kind of mural going down,” said Speer. “People were like, ‘Oh, two days ago that was a massive gray wall and had been that way for 50 years,’ and now it’s these big, huge, beautiful, drippy letters and people are pretty stoked, honking and wailing with tons of thumbs up and all that kind of stuff.”

But in Los Angeles where Speer has also painted, he said that people swore and threw eggs at him while he was working.

For Speer, his own perception of his work is complicated.

“It’s interesting that the things that I put out there are super positive, beautiful and awesome, but 90% of the time I don’t really like them,” said Speer. “They’re not enough for me.”

But he finds joy in the process. “And in the end, it’s something beautiful and awesome.” 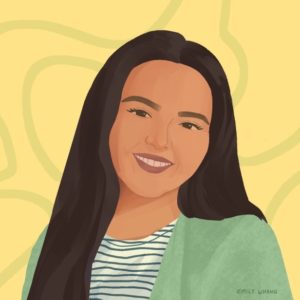 Originally from Fullerton, Calif., and now based in Chico, Kimberly is a student at California State University, Chico, where she’s earning a degree in journalism with an emphasis in news. Kimberly currently works as the news editor at her school’s newspaper, the Orion, after spending two semesters as a reporter there. Some of her hobbies include thrift shopping, scrolling through Twitter and Spotify and spending time with her friends and family.