Richard Falcon’s plan to engage the Latinx community in Sacramento through social justice theatre did not go as expected this year.

Before the pandemic, Falcon, an artist and grandfather of six, was performing plays about the Latinx community through his theatre arts company, Teatro Nagual. His bilingual plays deal with many topics inspired by the work of activists and leaders such as Cesar Chávez and Bishop Alphonse Gallegos.

“We tackle racism, poverty, environmental justice, voter suppression and voter education, all of the topics that our community needs, and we do it in a way that is nonpartisan, funny, and educational. So that our people will want to be engaged.”

Falcon honed his craft at the American Conservatory Theater in San Francisco and furthered his studies in Seattle and Los Angeles. He founded Teatro Nagual after discovering his passion for empowering the Latinx community.

Teatro Nagual doesn’t have its own venue. Instead, Falcon and his artists rehearse and perform shows in local venues, such as the B Street Theater, Sacramento State, Arden Arcade Neighborhood Association, the Latino Center for Art and Culture and Grant High School.

For now, Falcon works from home after taking a major step back from the many projects he had planned for Teatro Nagual in 2020. He also tested positive for COVID-19, along with his wife and daughter.

“When it hits you that hard, you start thinking of others. And so I had to think about my actors who were saying, ‘No, Richard, we’re still willing to get together, we’ll be safe, we’ll be safe.’ But I had to make hard, tough decisions and say no. No, we can’t do that; too risky.”

So far, three out of his nine artists, all Latinx, have contracted COVID-19.

According to data from the California state government, Latinos account for 61.1% of COVID-19 cases in the state, and 48.6% of deaths as a result of the virus.

And artists have also suffered from the economic impact of the coronavirus. According to the U.S. Bureau of Labor Statistics, unemployment rates for those in the arts, design, entertainment and media sectors have more than doubled since 2019.

Because the artists of Teatro Nagual are not on payroll, Falcon was not able to secure federally backed Paycheck Protection Program funding (PPP) for his organization.

“We had to come up with other ways to work with them [the artists],” said Falcon. “There were additional monies that we didn’t have at the time to try to virtualize.”

Fortunately, his nonprofit did receive money from the federal government’s economic stimulus – the CARES Act – through a partnership with the Sacramento Artists Corps.With this, Falcon was able to keep performing and visual artists employed.

“We’ve been able to put actors … and artists back to work, creating posters, coloring books, music, videos, PSAs, whatever it can be that would be relevant to our community. Especially because … Latinos are one of the hardest hit populations for COVID.”

Falcon and a small crew of artists are currently rehearsing for “Cartas De La Frontera” or “Letters from the Border” – a play about immigration and the thousands of people who have passed away while trying to cross into the United States.

After trying to record “Cartas De La Frontera” over Zoom, they realized that the story’s message was too powerful to create virtually, so they decided to record in a studio – while social distancing. Falcon plans to release the play on streaming platforms in English and Spanish.

“During this time as an artist, as a grandfather and a father, I think what I take [from] what has happened to me more than anything is a lot more faith. And I insist from myself on that faith [and] self care so that I can go forward because there are so many who cannot. We will go forward.” 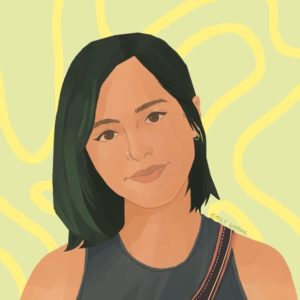 Melissa Franco is a student at Sacramento City College, where she is double-majoring in film studies and journalism and minoring in child development. Currently she manages a youth-led nonprofit media program under Access Sacramento for young journalists in Sacramento County and works for the YMCA of Superior California. Previously she worked for the Boys & Girls Clubs of Greater Sacramento and the YMCA of the East Bay, where she taught teens and middle-schoolers about filmmaking and art.